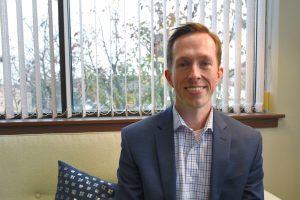 The Botstiber Foundation is pleased to welcome David R. Grady, CPA, MPA as the newest member of the Botstiber Advisory Board.

David is the Assistant Township Manager for Nether Providence Township and oversees the daily operations of the township administration, the public works department, and the police department, which covers Wallingford and parts of Media, Pennsylvania. He finds his role very interesting because of the variety of legal, financial, and public issues with which he deals with on a daily basis. He enjoys seeing the impact of his work on the community, particularly with many of the grant-funded projects he has managed that have added to the safety of the community, improved recreational offerings, and dealt with environmental issues.

He was previously a Certified Public Accountant for Ernst & Young in Philadelphia, where he worked in the financial services office. He has a B.S. in Accounting and a Master of Public Administration from Villanova University, and is currently an Adjunct Professor in Villanova’s Masters in Public Administration Program where he teaches Public Financial Management.

According to David, “Education is an important component of the Botstiber Foundation’s Mission, and it’s one that really speaks to me.” Since 2012, he has served in various capacities, including Treasurer, Interim-President, and currently, as Accountant, for the Starfish Foundation, which provides scholarships, tutoring, and mentoring to at-risk youth in Latin America. He is proud of the work that Starfish has accomplished since its founding in 2011, which includes having provided scholarships to hundreds of students who otherwise would not have been able to attend school.