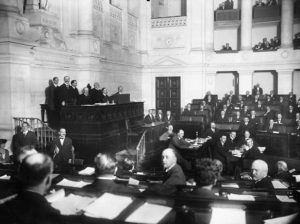 Where is America? Remaking Central Europe, the League of Nations, and the New International Order

Post-Habsburg Central Europe became a testing ground for a new form of global cooperation when the collapse of the Habsburg Empire left a region of new nation states in its wake. The ordeals of this period provoked the creation of “a new international order.” The League of Nations and other international organizations established new, internationally cooperative approaches for the sweeping problems that arose in the aftermath of the Great War. In terms of the remaking of Central Europe, the U.S. offered support and aid in myriad ways but particularly in the areas of public health and public finance. Learn more about the U.S. agencies and individuals involved in Remaking Central Europe: The League of Nations and the Former Habsburg Lands in this article by Peter Becker and Natasha Wheatley.