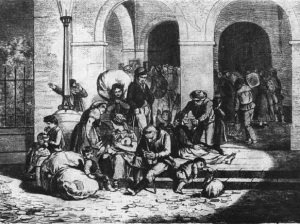 Historian Allison Schmidt explores the early stages of the migration journey for many Austro-Hungarian emigrants who chose travelling through Saxony as their route to the Americas (ca. 1880-1924). Read about why these emigrants chose this northern route and the interesting complications—some of them gendered—they encountered in two posts.

Emigration Routes – Part I
Excerpt: On November 26, 1908, police in Tetschen (“Děčín” in today’s Czechia) stopped a young man about to cross the border from Habsburg territory into Imperial Germany. The 21-year-old Hungarian, Bernhard Toth, had planned to emigrate to America via Hamburg, yet he did not have the required proof of exemption from military service.

Emigration Routes – Part II
Excerpt: The Leipzig registration station, opened in 1904, was part of a network of inspections stations that screened overseas-bound emigrants as they crossed Germany en route to port cities. Control stations (Kontrollstationen), which, unlike registration stations, required bathing and disinfection, arose first along the Prussian-Russian border in 1894. It helps to think of them as smaller Ellis Islands.