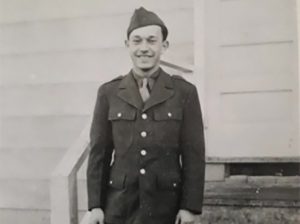 Former BIAAS Grantee Jacqueline Vansant features a letter from the Rundbrief, an extraordinary correspondence of Jewish-Austrian classmates that began as a promise in 1938. Written by Hans Kautsky, the letter provides a glimpse into Vansant’s current projects: an edition of the correspondence, and a collective biography of the class, who were 15 and 16 at the time of the Anschluss.

“I expect that this letter will be terribly long”: Hans (John) Kautsky’s First Letter from the U.S.A.
Sometime between March and April of 1938, a small group of 15- and 16-year-old schoolboys of Jewish heritage stood on a bridge over the Danube Canal in central Vienna and said good-bye to each other “forever.” Because the persecution of Austrian Jews, which had begun immediately after the Anschluss in March 1938, was particularly virulent, the boys and their parents knew that they had to flee the new Nazi regime as quickly as possible.