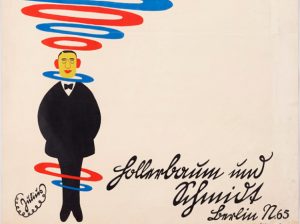 In this unique post, Karen Etingin presents the transatlantic elements in the work and style of one of the world’s original “Mad Men,” Julius Klinger. A preeminent poster artist during his time, Klinger’s innovations still influence the study and practice of design today. He was an ardent Americanophile and promoted US-style modern approaches favoring business and commerce in his work, recognizing early on the significance of “branding” before it was ever a marketing term.

Excerpt: Viennese-born Julius Klinger (1876-1942) innovated advertising posters, book and magazine illustrations, mass promotional campaigns, and brand development, and he had a single-minded approach to an International Graphic Language. He became well known in his Austrian homeland as well as in Germany by the outbreak of WWI via an artistic reputation built on the strength and range of his designs, which were characterized by graphic simplicity, eponymous typefaces and irony. An advocate of “Americanismus,” and the progressive attitudes towards modern business and media coming from across the Atlantic, Klinger understood the power of modern trademarks and logos and their ability to give identity to major businesses and manufacturers.