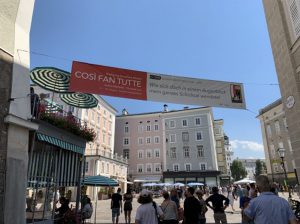 BIAAS Voices: How in a moment my whole fate has changed!

Katherine Baber, the Alice Mozley Director of the Salzburg Program of the University of Redlands, contemplates the current predicament for the Salzburg Festival, the only international festival to proceed during the pandemic in a “live” format this summer—after extensive study, planning and protocols. Missing in action, though, are influential actors since WWII: Americans.

Excerpt: Near the end of the first act of Così fan tutte, Dorabella and Fiordiligi are bewildered, mourning the sudden departure of their fiancés for war. They have no idea how much more profoundly their lives are about to be disordered. As the sisters retreat to their garden, Mozart tempers the words of Lorenzo da Ponte’s libretto by casting their duet in a tranquil mood, setting them up to have the rug pulled out from under them moments later in a typically rambunctious finale. What ensues—deception, disguises, loss of innocence, the questioning of love and loyalty—alters all. The couples who are married at the end are fundamentally different people than they were at the beginning. This Italian-style opera buffo is comic, yes, but also cautionary. Mozart might have warned us about 2020.