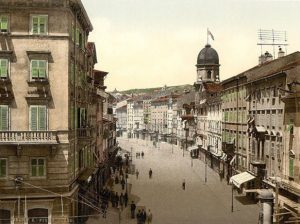 The Fiume Crisis: Made (But Not Primarily) in the USA

Historian Dominique Kirchner Reill introduces a compelling examination of the transatlantic dynamics in Fiume’s post-WWI Crisis. Was Woodrow Wilson solely to blame for the Italian nationalism and the global consequences that ensued from his miscalculations in this enterprise? Or, did the dissolution of the Habsburg Empire also perform a role?

Reill’s new book, The Fiume Crisis: Life in the Wake of the Habsburg Empire, published by Harvard University’s Belknap Press, is out. According to BIAAS Board Member Pieter Judson, author of The Habsburg Empire: A New History, “. . . Reill forces us to reconsider in profound ways how we conceive the history of the immediate postwar period in Europe.” BIAAS Board Member Tara Zahra, author of The Great Departure: Mass Migration from Eastern Europe and the Making of the Free World,concurs, “. . . Reill demonstrates the persistence of imperial loyalties underpinning their quest for greater autonomy. This book forces us to question what we think we know about the relationship between nationalism and empire in the aftermath of the First World War.”

Excerpt: What would have happened if Woodrow Wilson and his corps of American experts had focused less of their post-WWI energy on the northeastern Adriatic port town of Fiume? Perhaps the Paris Peace Conference would not have collapsed in diplomatic deadlock, leading to the only Great Power walk-out of the entire proceedings. Perhaps Japan would have been denied the mandate over mainland China. Perhaps two successive Italian governments would not have fallen apart. A charismatic dictator-poet might not have founded a rogue republic in the city. Italian pirates might have idled on the Adriatic, instead of attacking ships and scoring booty to fund the poet’s Fiume regime. Peace might have reigned then, in Fiume, over the 1920 Christmas holiday with no need to chase out said poet and his followers. Perhaps Fiume would not have become the smallest successor state of post-WWI Europe.