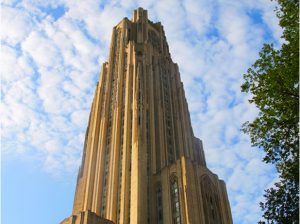 Former Journal of Austrian-American History editor and BIAAS grantee Kristina Poznan reports on the Austrian Nationality Room, one of the “rooms that show the good things immigrants brought to America.” Located within the University of Pittsburgh’s Cathedral of Learning, this classroom embodies 18th-century Habsburg with details from the Haydnsaal in the Schloss Esterházy, the palace in Eisenstadt, Austria.

Excerpt: Jutting skyward on the University of Pittsburgh campus is one of the tallest educational buildings in the world, the Cathedral of Learning. The 2,000-room Cathedral was commissioned in 1921 and began hosting classes in 1931. In addition to the academic and administrative departments housed in this building, it contains over two dozen instructional spaces each designed to celebrate a different culture that had an influence on Pittsburgh’s growth, reflecting the significance of the city’s immigrant population. European states, through local organizing committees, were granted the opportunity to decorate “nationality rooms” in the post-war era. The Cathedral as a whole was a unifying project, but the distribution of classrooms based on new political borders in Europe formally divided Pittsburgh’s immigrants. “Each group had to form a Room Committee, which would be responsible for all fundraising, designing, and acquisition.” Pittsburgh residents hailing from Austria-Hungary could be represented by the Czechoslovak Nationality Room (1939), German Nationality Room (1938), Hungarian Nationality Room (1939), Polish Nationality Room (1940), Romanian Nationality Room (1943), and Yugoslav Nationality Room (1939). (An Israel Heritage Room was added in 1987 and a Ukrainian Room in 1990). This method of division stands in contrast to that employed by the Cleveland Cultural Gardens, which apportioned spaces by ethno-linguistic cultures, rather than by country.