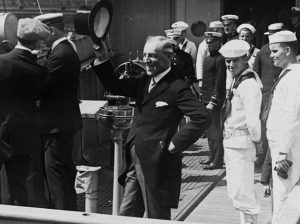 Historian Larry Wolff chronicles the evolution of US President Woodrow Wilson’s anti-imperial ideology towards the Habsburg Empire in this article. Though Wilson called for the autonomy of the Habsburg peoples in Point Ten of his Fourteen Points speech in January of 1918, he did not arrive at a fully frank opposition to the empire’s existence until that October–a year and a half after America entered World War I. Wilson’s thinking about the Habsburg monarchy was shaped by his perspective on the Ottoman empire, his youthful admiration for British Liberal leader William Gladstone, and his sense of Abraham Lincoln’s legacy of emancipation.