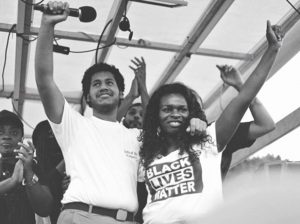 Farid Hafez, a Vienna-based political scientist at Salzburg University, Department of Political Science and Sociology, examines the rise of the Black Lives Matter movement in Austria.

Excerpt: The murder of Afro-American George Floyd at the hands of a police officer elicited a global chorus of outrage. To see somebody being ruthlessly killed in eight minutes and 46 seconds leaves you speechless, if not angry and at least in pain–no matter who you are and where you live. In Austria, out of 8.9 million inhabitants, only an estimated 40,000 people have African ancestry (numbers from 2010, including Egypt and Tunisia). Many would not have thought that the Black Lives Matter protest that started in the United States could spill over to the Alpenrepublik. And yet it did.