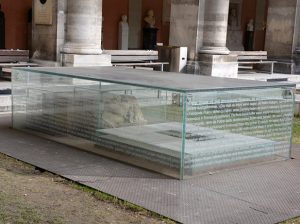 BIAAS Voices: Leaving Siegfried Behind: Reimagining Monuments in Austria and the American South

In Leaving Siegfried Behind: Reimagining Monuments in Austria and the American South, Alexandra Sterling-Hellenbrand, Professor of German and Global Studies at Appalachian State University, contemplates two monuments, the Siegfriedskopf at the University of Vienna and “Silent Sam” from the University of North Carolina, Chapel Hill. The comparison, in the context of the Black Lives Matter demonstrations in summer 2020, offers a contrast in how both Austria and the United States approach the difficult history that monuments represent in their respective communities.

Excerpt: A solitary stone figure occupies a prominent space at the institutional heart of the university. The statue commemorates the lives, primarily of students, tragically cut short on the battlefields of a war that ended in defeat. The memorial testifies to the continuing significance of that lost cause; the figure’s presence allows that past to intrude constantly into the present, allows that past to insist on keeping its narrative and its problematic memory current for successive generations. Each generation, in its respective present, must wrestle with the legacy of the past for which the memorial stands, a past that becomes increasingly contentious over time, as times change.