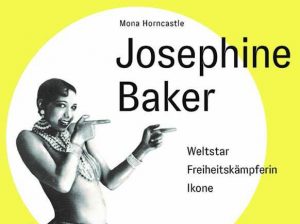 Author Mona Horncastle offers a glimpse into to her latest book, Josephine Baker. World star. Freedom fighter. Icon. (Molden Verlag, Vienna) by highlighting Josephine Baker’s time in Vienna in the context of Baker’s career, racial experiences, and civil rights advocacy in this blog. Despite sold-out performances in 1928, Baker’s presence was contentious in the streets, churches and parliament of Vienna. Stepping “out of line” on and off the stage, Baker also becomes a spy and troop entertainer, demands racially integrated audiences, and involves herself in the civil rights movement.

Excerpt: In 1928, after two successful years in Paris, Baker starts her first tour of Europe with great expectations. Yet her victories are always accompanied by controversy. In Vienna, the first stop on her journey, Baker is omnipresent: posters advertising her second film La Revue des Revues show the almost naked Baker in pearls and feather jewelry throughout the city. The poster for her revue Black and White is no less revealing. Vienna is not Paris, and the entertainment culture of the Music Hall is still completely foreign to the city, which leads to agitation among cultural conservatives: Catholic circles mobilize before Baker even arrives in Vienna.