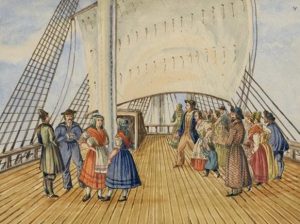 In our special holiday newsletter last year, frequent contributor Kristina E. Poznan traced the linzer cookie’s origins in the United States to Austrian Franz Hölzlhuber. (According to legend, Hölzlhuber introduced the torte to Milwaukeeans in 1856 when a job he expected as a conductor failed to realize, and he worked as a baker instead.) In her earlier study, Poznan discovered Hölzlhuber was not only a musician and baker, he was also an artist. She teamed up with Janine Yorimoto Boldt, the Associate Curator of American Art at the Chazen Museum of Art at the University of Wisconsin-Madison, to present a sampling of Hölzlhuber’s watercolors. The pieces they selected were created throughout the four years of Hölzlhuber’s journeys in the United States, pieces that document an “outsider’s assessment” of antebellum United States.

To learn more, view the Blog on the BIAAS website.

News about Tara Zahra, BIAAS Board Member
Congratulations to Dr. Tara Zahra on her latest award: a John Simon Guggenheim Fellowship! Her research focuses on the transnational history of modern Europe, migration, the family, nationalism, and humanitarianism. She is currently working on two book projects: a history of deglobalization in interwar Europe and, with Pieter Judson, a history of the First World War in the Habsburg Empire. Zahra is the author of several books, most recently The Great Departure: Mass Migration and the Making of the Free World (Norton, 2016) and, with Leora Auslander, Objects of War: The Material Culture of Conflict and Displacement (Cornell, 2018). She is the winner of multiple awards, is a member of the American Academy of Arts and Sciences, and in 2014 was named a Macarthur Fellow.

To learn more, view the July 13 Newsletter or visit the BIAAS website.