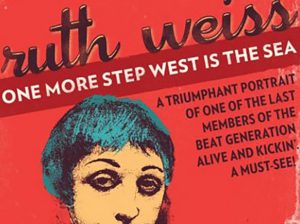 Born in Berlin in 1928 to Austrian Jewish parents, Ruth Weiss grew up in Vienna in the 1930s. Via a harrowing escape, the Weiss family fled soon after the Anschluss and migrated to the United States, settling first in Harlem, then Chicago. When she was in her early 20s, ruth recited a poem while accompanied by jazz musicians. Thus, in 1949, hers was the first “Jazz & Poetry” performance. Taking this novel form with her, she hitchhiked–years before On the Road was published–to San Francisco, where she eventually befriended many Beat Generation writers such as Jack Kerouac, Neal Cassady, Bob Kaufman, Lawrence Ferlinghetti, Jack Spicer, and, later, female Beat poets such as Anne Waldman, Joanne Kyger, and Diane di Prima. Under-acknowledged for much of her artistic life, she was a legend in West Coast California and became celebrated in Austria in her later years. She died on July 31, 2020, at the age of 92.

To learn more, listen to the Podcast or visit the BIAAS website.

Vienna in Hollywood Symposium
The Influence and Impact of Austrians on the Hollywood Film Industry, 1920s-2020s

Organized by The Academy Museum, USC Libraries, USC Max Kade Institute, with support from the Austrian Consulate General in Los Angeles, BIAAS is pleased to provide funding for this event.