BIAAS: Podcasts – A Sense of Belonging: Camphill and Its Origins 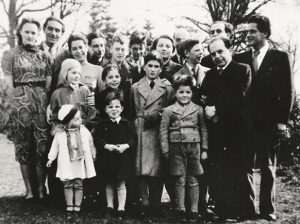 The Camphill Movement is a global network of intentional communities for abled and intellectually disabled people. With over 100 communities today, Camphill began in 1939 after Dr. Karl Koenig, his wife Tilla, and a group of volunteers—all having fled Nazi-occupied Vienna in 1938—rejoined in Aberdeen, Scotland. There they undertook the care of Austrian- and German-Jewish refugee children, as well as British children, with disabilities. From that first Camphill Special School, a fusion of Jewish diasporas with Austrian and German spiritual movements and the U.S. counterculture all developed Camphill’s extraordinary approach to disability.

In these two podcasts, Dr. Katherine Sorrels explains the Camphill Movement as it exists today and as it was founded 80+ years ago.

“The connection to the Austrian founders and the sort of German character of the movement and of anthroposophy is really strong. Camphill is very much an international global movement now, but in some ways, it still has a sort of German-Austrian-central-European diasporic identity.”

Katherine Sorrels is associate professor of history, affiliated faculty in Judaic studies, and chair of the Taft Medical Humanities Research Group, all at the University of Cincinnati. Her research concerns modern Central European and North American Jewish history, specifically Jewish internationalism, the history of medicine, and disability history. She is the author of Cosmopolitan Outsiders: Imperial Inclusion, National Exclusion, and the Pan-European Idea, 1900-1930, and is currently writing On the Spectrum: Jewish Refugees from Nazi Austria and the Politics of Disability in the Britain and North America.