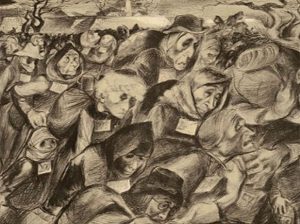 Only a limited number of Jewish children, accompanied or alone, immigrated to the United States during WWII, and the topic has been largely overlooked in popular literature. Austrian children and youth who fled Nazi-occupied Austria to land safely in the United States has been even more neglected in terms of academic research. Here, however, in this extraordinary podcast series to support the related special issue of the Journal of Austrian-American History, guest host Jacqueline Vansant, professor emerita of German at the University of Michigan-Dearborn, discusses three different research perspectives examining Austrian-Jewish Child Migration during WWII: The Austrian Heritage Collection in Austrian Children and Youth Fleeing Nazi Austria with Tim Corbett; Epistolary Rescue in Austrian Children and Youth Fleeing Nazi Austria with Kirsten Krick-Aigner; and Early Refugee Studies in Austrian Children and Youth Fleeing Nazi Austria with Swen Steinberg. These podcasts highlight the important work of the guests (and guest host) in examining material excavated from diverse archives via multiple lenses and demonstrate the extraordinary capacity of this archival research to illuminate the Austrian-Jewish child and adolescent experience.

Guest host Jacqueline Vansant, Professor Emerita of German at the University of Michigan-Dearborn, is one of the foremost US-based scholars of Austrian literature, film and history of the twentieth century. Currently she is researching a collective biography of a group of fifteen- to sixteen-year-old Austrian schoolboys of Jewish heritage who fled Vienna between April 1938 and 1939. In her most recent book, Austria Made in Hollywood, Vansant analyzes Austrian settings in over sixty Hollywood films by directors from Erich von Stroheim to Billy Wilder to Michael Curtiz, and many lesser knowns in-between.