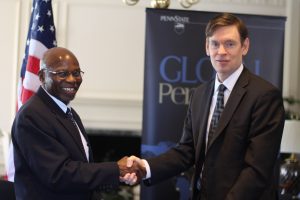 Earlier this year the Botstiber Foundation and Penn State formalized plans to launch the Botstiber Scholars Program which awards full undergraduate scholarships to select students from sub-Saharan Africa to study in the fields of science, technology and commerce.

“The Botstiber Foundation is providing a life-changing opportunity to young scholars in Sub-Saharan Africa to study at Penn State. It will not only transform their lives, but the ripple effect on their communities cannot be underestimated,” said Michael Adewumi, Vice Provost for Global Programs.

The first cohort of four scholars to University Park have traveled from Zimbabwe, Rwanda and two from Ghana.

“We chose Penn State as our partner for its academic excellence, diverse and inclusive environment, and global perspective,” said Terrance Kline, Administrator of the Botstiber Foundation.

Recruiting a pool of select high school students in sub-Saharan Africa was a new challenge. Through a joint effort with Education USA Advisors, Peace Corps Volunteers, Penn State staff, and Global Programs’ own Jessica Gardner, Penn State expanded its reach into the cities, towns, and villages of the continent. Then, a committee consisting of Bostiber Foundation leadership, Penn State faculty and admissions staff evaluated applications from over 15 countries to recommend the first four Botstiber Scholars.

“It was truly a team effort,” said Jennifer Campbell, Director of Student Engagement and Operations for Global Programs. “This would not have happened without the office of Admissions, Development, Housing, the Registrar, all working together.”

“After months of recruiting, selection, visas, travel and planning it is wonderful that our Botstiber Scholars have arrived!” said William Shuey, Sponsor Relations Manager in Global Programs. Shuey and his team also manage the Transition Partners who are current international students and will serve as mentors to the Botstiber Scholars.

Every year more than 9,000 international students, scholars and faculty from 140 countries choose Penn State, adding to the vibrant global community in State College. Penn State is ranked as a top 50 world university, according to the Center for World University Rankings, which can be accessed at http://cwur.org/2015/.