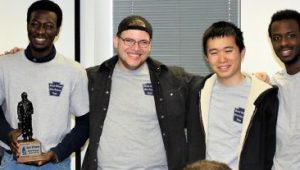 After a year full of new friendships, classes, and cities, the Botstiber Scholars are returning home to reconnect with friends and family. They will be using the summer to research companies in their fields of study where they might receive internships. One scholar, Emmy Muhoza, has secured an internship with Rutungo Mining Company for the summer. Emmy is pursuing a degree in Mining Engineering. He is passionate about deepening his understanding of and experience in the field.

Emmy spent a large part of his spring semester preparing for, and then competing in the Eastern SME (Society for Mining, Metallurgy and Exploration) Spring Collegiate Mine Rescue Contest. The event was held at the Mine Safety Training Center in Harrison County, Ohio. During the contest, the volunteer mine rescue teams worked together to find ‘missing’ miners, correct hazardous conditions found in the simulated mine, remove harmful mining gases, and navigate around dangerous obstacles, all under the pressures of time and the competition. Emmy was on one of two teams from Penn State. Other teams in attendance represented University of West Virginia (two teams), Southern Illinois University and University of Kentucky. Emmy held the role of map person on his team and helped lead them to a third-place medal.