Botstiber Scholars Program: Congratulations to the Class of 2021 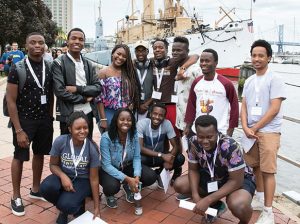 The Botstiber Scholars Program at Penn State is proud to announce the graduation of three of our scholars, Nahom Regassa, Faith Shipapa and Benson Wainaina from Penn State University.

Nahom Regassa earned a Bachelor of Science degree in Computer Engineering and was inducted into Eta Kappa Nu Association. Eta Kappa Nu (HKN) Association is a global organization dedicated to encouraging and recognizing excellence in the IEEE-designated fields of interest. The Penn State HKN Epsilon Chapter, established in 1909, is an honor society consisting of the top 33% of seniors and top 25% of juniors in Electrical Engineering, Computer Engineering, and Computer Science. Originally from Ethiopia, Nahom plans to work in the Computer Software industry. He would like to thank everyone involved with the Botstiber Scholars Program.

According to Faith,
“I am excited to be graduating from Penn State and stepping into the next phase of my life. I am currently applying for Structural Engineering positions in Engineering firms in Kenya (my home country) and I am looking forward to kickstarting my professional career. I would like to thank the Botstiber Foundation for providing the opportunity for me to acquire a degree from a prestigious university such as Penn State and being supportive throughout the four years. I would also like to thank Global Programs and more so the Sponsored Relations Office for making the smooth implementation of the Botstiber Scholars Program possible. In my time at Penn State, I have grown as an individual in tremendous ways, especially in leadership having served as the President of the Sponsored Student Leadership Panel and been part of the Presidential Leadership Academy. These have been beautiful four years in college and I am looking forward to what comes next!”

Benson Wainaina earned a Bachelor of Science degree in Data Science with a concentration in Computational Data Sciences. He received a Certificate for being a Nittany AI Challenge 2020 Finalist. Originally from Kenya, Benson plans to enter the workforce as a Data Scientist having acquired data wrangling skills through his major. In his junior year at Penn State, he used his skills to win the Nittany AI challenge in 2020 where he helped build a database to host student, instructor, and learning material data for the team Nyansapo. For his final capstone project, where the team was tasked with building a data dashboard to present key opioid metrics, he helped integrate data from various sources. The capstone project won both best video and SEE 360 – Service Enterprise Engineering Awards through The Bernard M. Gordon Learning Factory. All these achievements couldn’t have been possible without the help of his Family, Botstiber Foundation, Global Programs, and the Botstiber Scholars who believed in his dream to make the world a better place.

Congratulations to our graduating scholars on all their hard work and accomplishments. The Botstiber Foundation looks forward to hearing about all their future endeavors.