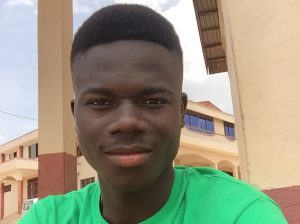 Edward Amoah, who originates from Ghana, is a recent Penn State graduate who majored in Computer Engineering. Edward was one of the four Class of 2020 Botstiber Scholars who graduated from Penn State in Spring 2020.

“Schools are closed, but we can still keep on giving kids some engagement and help them with their numeracy and literacy levels,” Amoa said. To learn more about Edward Amoah, view his Botstiber profile.