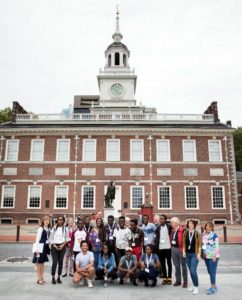 The Botstiber Foundation hosted their annual Botstiber Scholars Conference in Philadelphia, Pennsylvania. These conferences serve as a fun and educational way for the scholars to build collegiality as a group, as they get to know the Foundation and explore a new city.

This year, during the retreat, the scholars from the junior and sophomore cohorts gave presentations of their summer assignments to the members of the Botstiber Board of Advisors at the Independence Seaport Museum. Junior scholars gave presentations on their experiences with creating e-portfolios for potential employers and networking with companies they hope to intern with during the summer of 2019. Sophomore scholars delivered presentations on their experiences with conducting informational interviews with companies from their home countries.

After the presentations scholars and attendees participated in a tour of the Cruiser Olympia at the Seaport Museum. This was followed by a guided walking tour of historical sites around Philadelphia, significant to the founding of America.

The walking tour was followed by a reception and culminated with dinner at Positano Coast.