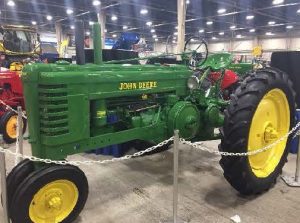 On January 12, 2019, the Botstiber Scholars traveled to Harrisburg to visit the Pennsylvania Farm Show. The Farm Show is the largest agricultural event in Pennsylvania, as well as the “largest indoor agricultural exposition under one roof in the nation,” according to the event’s website. The scholars saw a variety of breeds of horses, sheep, cows, rabbits, alpacas, chickens, and goats. They were amazed to see some breeds of these animals that they had never encountered before, such as draft horses. They also witnessed a cow giving birth, as well as demonstrations such as the Farm Class Horse Pulling, in which draft horse teams compete to see which team can pull the heaviest load a certain distance.

The students enjoyed learning more about the diversity of products that are made and grown in Pennsylvania, including apples, mushrooms and honey. They also saw unique displays, such as the giant butter sculpture, which uses more than 1,000 pounds of butter. After lunch, the group headed back to Penn State in State College, with a new appreciation for the farming areas that surround the town and that can be seen throughout the state of Pennsylvania.