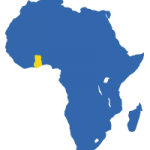 I am majoring in Energy Business and Finance (EBF), with a minor in Mathematics. With a degree in this, I will be able to connect with other Botstiber scholars and other alumni, especially ones interested in supporting developing countries such as Ghana. Also, an EBF major will help me achieve my dreams by solving a well-rounded problem of energy crises both on the field and its business activities not only in Ghana but also surrounding countries. Aside all this, I will be able to support other upcoming students who get into the Botstiber Scholars Program in any way possible.

At Penn State, I joined the African Student Association (ASA). Aside from my Botstiber scholars colleagues, ASA became my first means of connecting with other students. It feels so good to know other people from your country and who have the same language in common. This made me feel at home.

In 2017, I joined the spring break alternative group which took a trip to North Carolina to engage in a couple of community service projects like working on a farm and working with the homeless. This has been something I always wanted to be a part of and finally getting the opportunity brought out the best in me. Currently I am looking forward to being one of the site leaders during any other trip.

I joined the Penn State Positive Energy group. This group consists of students in the Earth and Mineral Department where we have weekly meetings to discuss and debate energy issues around the globe. This work is in-line with my career field so I am excited to be involved.

The Botstiber Scholars Program is a great program that helps you attain quality education.